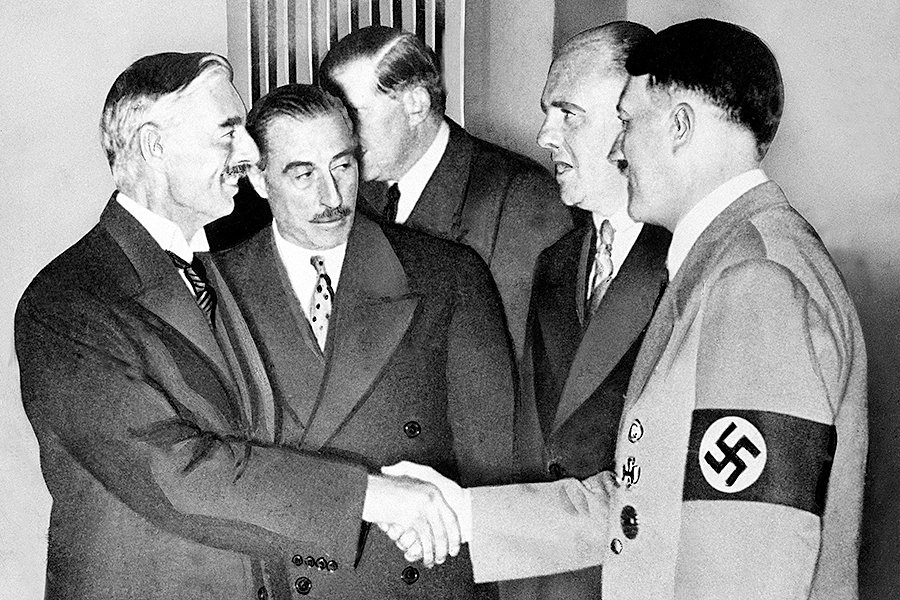 Now trying to avoid war is laudable. But during the mid- and late-1930’s, siren voices, both inside and outside Chamberlain’s own Party, were warning that Herr Hitler, the Nazi Reich Chancellor and even by 1934 effectively dictator, wouldn’t be satisfied until he had most, if not all, of his demands realised, and most, if not all, of Europe under German hegemony. As the decade progressed, these warnings became louder, yet Chamberlain persisted in an increasingly arrogant belief that he was the man, and he alone, who could strike up such a relationship with Hitler that would keep Britain out of another major war, and would keep Hitler safely corralled by the traditionally major Powers of Europe, such as Britain, France, Italy, and Russia.

But as time went on, clearer thinkers came to realise that Italy, under Mussolini, would support the side that was most likely to help them regain some international prestige and some territorial advancements, and as a fellow Fascist state, this was most likely to make them sympathetic to National Socialist Germany. And it became increasingly clear that Russia was also ruled by another megalomaniacal, murderous crackpot, who was no more likely to play the game by British and French rules than he was to stop killing his own people for no other reason than he was a nasty piece of work. And the French by this time were so shit scared of a repeat of 1914 and 1870-71 at the hands of yet another German bloke that they were busy building half a wall.

Not to worry, says Chamberlain, I’ll manage, and anyway I’ll take my umbrella. So off he went to meet Hitler, and through September 1938 he flew to Germany to meet Hitler on three separate occasions, each time coming back with a note of triumph. (To be fair, he did always take his umbrella.) So much for that, events were to show.

Now, those who supported Chamberlain’s efforts, including many Tory Grandees and members of the gilded aristocracy, have long been labelled “appeasers”. They were so labelled at the time, by a number of those in both Tory and Labour ranks, a small group to begin with, but increasingly large as the months went on, who believed the time was passing where Britain could sufficiently rearm in order to meet Germany on equal terms, especially since the Nazis were building up their forces like it was going out of fashion. Even though there’s evidence that Hitler didn’t envisage Germany being strong enough to go to war for several years yet, by 1938 he’d become ever more convinced that the western democracies were decadent and ineffectual, and was thus encouraged to push his luck with more chutzpah than ever. And a “peacemaker” such as Neville, with his old-school charm, his municipal attitude, and his air of effete diplomacy, was hardly likely to give Adolf much pause for thought. After all, where Neville had his umbrella, Adolf had an Alsatian dog. And some tanks.

To be fair, when Chamberlain returned from Munich with his scrap of paper in his hot little hand, the praise of King George’s telegram ringing in his ears, and the pliant press singing his praises, large parts of the populace cheered him to the rafters. Although most of them just believed what the Daily Mail told them anyway, and its judgement had been shown to be decidedly suspect throughout the Thirties. Still, plus ça change, plus c’est la meme chose, what?

It has to be recognised that many of these men, appeasers as they were seen by history, were men of an age who had endured, or at least seen at close hand, the horrors of the Great War, and were quite understandably driven by a fervent desire to avoid such fearful bloodshed and destruction once again. Their reluctance to risk another war with Germany, one which might reduce much of Europe to rubble, even if it meant giving Hitler what he wanted on the other side of the Continent, is very understandable. But others can’t claim the same defence. And it has to be said that the likes of Churchill and his fellow “anti-appeasers” had also experienced the same horrors twenty years before. And there’s little doubt that the arguments weren’t clear-cut – some who sought to appease did so to allow Britain time to rearm; Chamberlain was in part following the same strategy of Baldwin and MacDonald before him. Even the Labour Party was tying itself in knots by opposing Hitler and Chamberlain’s appeasement, yet was opposing rearmament. But the appeasers’ name got worse because some of their number openly sought a rapprochement with Hitler; they saw how he’d subjugated the Trade Unions, and eradicated the Communists, and made the Railways work, and thought Britain could do with a dose of that here. “Better Hitler than Communism” was a popular slogan in some quarters. Types such as Lord Londonderry, toadying to Ribbentrop, (who even Hitler thought was no more than a useful idiot, until he became a useless one, and who Göring called a ‘stupid ass’, and at Nuremberg crushed him with the fabulous put-down, ‘you weren’t even interesting’) ensured that when Chamberlain’s policy failed, appeasement was seen in the light of weakness and naivety.

So, it all went badly wrong. We sold the Czechs out to avoid war, then ended up going to war anyway.

This cautionary tale is one very interesting facet of the years leading up to the Second War. And if anyone wants to read an illuminating account of Chamberlain’s efforts, and failures, of 1938, and of how Hitler gathered Germany’s strength and put his confidence in his “destiny” into a series of gambles, I can highly recommend two books.

“Munich, The 1938 Appeasement Crisis‘, by David Faber, shows how Chamberlain and Halifax, as well as a cast of diplomats, tried repeatedly to satisfy Hitler, who of course found not so much satisfied as encouraged. It throws light on the determination of Chamberlain, not only to ‘do business” with his new friend at the Berghof, but also to subvert and deceive his own Foreign Office and Foreign Secretary, because they didn’t share his faith in the German Fuhrer. And it shows how the tide turned against Chamberlain, how he began to go from clear-eyed Statesman, with a workable policy, bestriding the international stage and making pacts with the Devil, to being seen as the architect of a failed policy, a weak strategy, and the torch bearer of defeatism.

Of course, this was history’s verdict, and as usual, it is now undergoing revisionism, but there’s no doubt that between him and his nemesis in Tory ranks, Winston Churchill, it was the latter who would soon be seen as the hero and Chamberlain the villain. When he died in 1940, he must have been a man broken by the outcome of his efforts although his final writings showed he was convinced he was correct right up to the end. History would judge otherwise, and he would be found on history’s wrong side. Faber’s book is an excellent work on a fateful year, and one which had terrible consequences in those which followed.

Another work dealing with this fateful year is “1938, Hitler’s Gamble“, by Giles  MacDonough. Written from a different viewpoint to David Faber’s book, MacDonough examines how, during 1938, Hitler put his curious mix of opportunism, pragmatism, belief and reticence to work. A year that begins with Hitler strengthening his grip on the armed forces, and weakening that of the Prussian Officer caste with the Blomberg-Fritsch affair, was to end with the continued forced expulsion of Jews, a chapter in a story which was to end in a horrific tragedy of death on an industrial scale. MacDonough populates his book with a cast of minor characters, descriptions of how the Nazis squabbled and scratched amongst themselves for power and position, and a picture of Hitler, above the detail, finding success in a series of gambles which would embolden him, and strengthen his belief in his “destiny”.

1938 would prove to be a critical, and pivotal, year in the world’s descent into war. These two books are a useful contribution to understanding it.