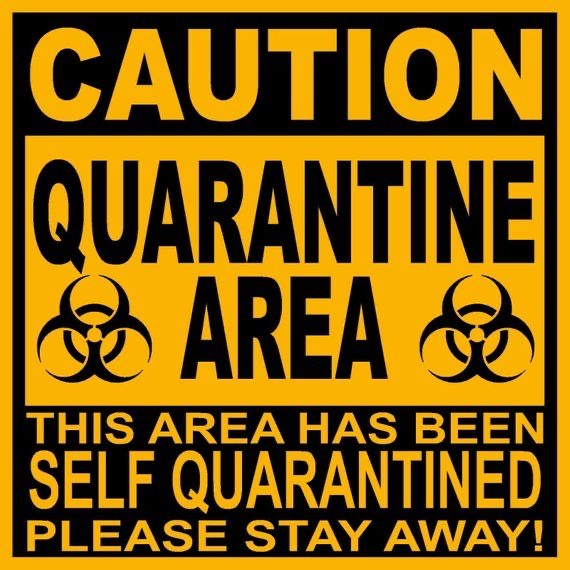 So, this is lockdown. The Coronavirus is taking its toll, with today seeing over one million people infected worldwide, and 50,000 people dying as a result. Wow. By now, we’re used to the social distancing; used to the not going out whenever we feel like it; used to the no sport; used to the wall-to-wall Coronavirus coverage on TV and even more re-runs than usual. It’s initially for three months. It really began on 23rd March, so it’s been 10 days so far.

Shortly after Boris Johnson announced the restrictions (although it took several days before we were all clear about what they were – or more accurately, before successive Government Ministers were sure about them ) I received my letter from the NHS telling me that because of my immunosuppressant friend Azathioprine, I was being held under house arrest for twelve weeks. It was a bit like being in China in 1975, or North Korea in 1980, or Albania in 1967. Or even in the first two today!

Actually, I don’t mind the house arrest too much, but I feel the five armed guards posted outside are a bit over the top. Never mind, Boris has a job to do. Speaking of Boris, it’s good to see that our political entertainers in Government are running true to type. First they make overblown statements to reassure us, such as “it’ll all be over by Christmas”, (hang on, sorry that was World War 1); or “we’ll be testing soon”, then “we don’t need to test, you’ll all catch it then you can’t catch it again’ then segueing into “we’re testing loads” (which meant we could be testing loads but we aren’t, and not the right people anyway), which they then explained that they meant they can’t test for lots of reasons they don’t need to go into, but will be doing millions by the end of April. Honest.

Actually, the ‘no need to test ‘cos loads of you’ll catch it then you can’t catch it again’ is interesting. It’s a bit like saying to people in a crowded shopping mall where a crazy gunman is spraying bullet, ‘we could have got you out because we knew he was on the way here, but we didn’t because once you’ve been hit by the bullets and die there’s a decent chance that you won’t get dead in the future.’ Thank you Lord for the gift of politicians. What the hell did we do to deserve this lot? Oh, I remember, we voted.

Anyway, I think I’ve established my credentials on the what-I-think-of -politicians front. Now I’d like to say something about handling ‘lockdown’. At least, my two ‘pennorth. (Younger readers, ask your granny.)

The television folks have been great. Celebs, from Angela Rippon to the Green Godddess, via Mr Motivator and someone called Joe Wicks, appear regularly to show how to keep fit using a tin of baked beans, a dining chair and a small cocker spaniel dressed as Lady Gaga. (Made that last one up.)

And there are plenty of experts appearing, doctors and psychologists, to advise us how we can maintain our mental health. It’s all been a great help, mainly because I’m maintaining my mental health by assiduously avoiding the whole lot of them.

So, you want to know, how am I coping? Fine, thanks. Up to know, we’ve managed for food, without resorting to buying toilet rolls to make bread; my wife’s been engaged in upholstering furniture, with wonderful results. (She isn’t an upholsterer so good for her.) It’s a bit of a drag not being able to call on my Mother, who’s 91 and takes loads of meds daily, but I’ve made a workaround for that, and at least she gets some peace from me; I’ve been watching the usual stream of tv documentaries, old United games, and wending my way through my collection of 600 books, mostly history. The exciting time comes when I finish one – that’s when I get to choose the next, which can take some considerable time. Today’s choice has been between Anthony Beevor’s ‘Arnhem’, his ‘Ardennes’, or a left field choice, (‘cos I read very little fiction) – James Ellroy’s ‘L.A.Confidential’. I’ll let you know how I get on.

Of course, I’m under no illusion that anybody will read this. And that doesn’t matter. I write for myself in the main; but if I’ve helped anyone to while away a few minutes , and distracted them from watching the same piece of news for the eighteenth time today, then my work here is done. Watch this space for more – but not too closely, because if I’m not bored, or I lose interest, or decide to try to sneak past the guards dressed as a Dutch milkmaid and get captured, there may not be more. We’ll see.