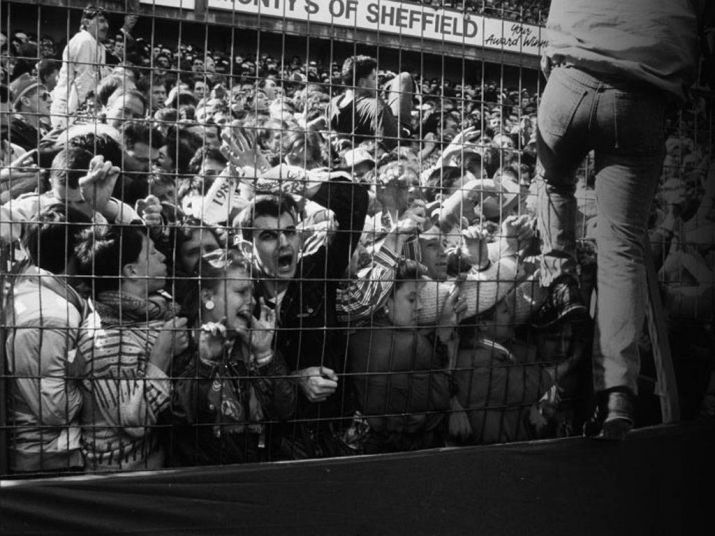 Today, the 15th of April, is a bright, sunny day. The air is warm and resounds to the sounds of an English spring; it heralds the future with the suggestion of a fine summer, and deceives us all into thinking that long, warm pleasant days stretch ahead.

But this year, the spring promise is only the backdrop to the virus which has swept the globe, dominated the media, and forced everyone to change the habits which we think will never need to change. Yet thirty-one years ago, a day like this began as so many others. An ordinary day. And yet one which would also change so many lives forever. A Saturday, when people would go shopping, or fishing, or take the chance to tidy the garden up, or perhaps visit friends and family, and relax away from the working week. Or maybe go to a football match…

And elsewhere in the world? Events were taking a momentous turn in China, with the start of the protests in Beijing’s Tiananmen Square. It was the seventy-seventh anniversary of the loss of life on the Titanic; thirty years later the famous Cathédrale Notre-Dame de Paris would cause the world to catch it’s breath as it caught fire. In the United States it’s when baseball fans celebrate ‘Jackie Robinson Day’, to commemorate the day in 1947 when he became the first black player in Major League Baseball, turning out for the Brooklyn Dodgers. And in England, it was F.A.Cup semi-final day…

In Tiananmen Square, it would take until the 4th of June for the protests to end in massacre. In Sheffield, England, at a football stadium callled Hillsborough, there weren’t any protests – but there’d still be a massacre.

Of course, by now, everyone knows the story. Of how Liverpool and Nottingham Forest supporters woke that morning and left home, excited at the prospect of watching their teams compete for a place in the Final at Wembley. They were entitled to have high expectations, after all, Liverpool were League Champions, and would go on to repeat the feat that season. Forest had just won the League Cup, and would finish third in the League. The managers were lauded by their fans, with Kenny Dalglish and Brian Clough both enjoying success.

These fans would travel in a state of happiness, with the protest of more success on the field. They kissed loved ones goodbye, saying ‘see you later Mam’, or ‘don’t wait up honey’. And off they went. 96 never returned. Many, many more lives were completely destroyed…

The first tragedy began just before the kick-off, when incompetent policing, poor communication, and and a failure of authority allowed too many people into the Leppings Lane end of the ground. A Police Constable radioed his commanders warning of the bottleneck building up, and asking them to delay the kick-off by twenty minutes, as had been done two years earlier; it was denied.

The crush built up. Those of us who have seen the photographs of people forced against the mesh of the fence, crying, pleading, dying, will never forget it. Fans trying to climb the fence to survive were forced back by the Police. But at five minutes past three, when the barriers were failing under the weight of those desperately fighting for breath, the game was stopped.

Bodies on the pitch. The dying crying for their mothers. Fathers desperately searching for sons and daughters. And 95 died that day. 96 when Tony Bland died four years later. 97 when Stephen Whittle, who’d given his ticket to a friend who became a victim, committed suicide in 2011; tormented by survivor guilt for the rest of his life. And countless mothers, fathers, sisters, brothers, who had their loved ones ripped away from them.

But there were more tragedies to come. They began straight away, and became the crimes of Hillsborough. When the senior Police Commanders lied, and blamed the fans. When the Sun newspaper lied, and blamed the fans. When the Coroner refused to hear the evidence of three Doctors there that day (including the Sheffield Wednesday Club Doctor) about the chaotic police response. When that Coroner was seen enjoying a celebratory drink with senior Police Officers after the verdict of accidental deaths.

It has gone on for the last thirty one years. It went on when Police Commander David Duckenfield, who later admitted he hadn’t familiarised himself with the layout of the ground, ordered a gate to be opened to allow the fans building up outside into the ‘pens’, without (as he also later admitted) considering how many were already in there. When he then lied and told people that the crush was because drunken Liverpool fans had forced that gate open.

It went on when the Sun printed lies that the fans had urinated on Police Officers trying to help people. When Margaret Thatcher’s Press Secretary, the odious Bernard Ingram, repeated the claim that the fans were drunk and had caused the tragedy. (He even wrote to a Liverpool supporter saying that he thought that ‘people should just shut up about Hillsborough’. He also said ‘least said, soonest mended for Liverpool’.) Needless to say, Ingram didn’t lose anyone that day…

It’s gone on when the same David Duckenfield has evaded justice ever since’. And when Norman Bettison was knighted and lauded, despite his part in the tragic consequences of incompetence.

And it’s still going on, such as when a young man , Dave Rowland, and his mate tried to help seventeen year-old Henry Rogers, sadly without success. Afterwards, they visited his family to tell them that their son hadn’t died alone, then attended Henry’s funeral. Dave Rowlands never completely got over that day. And last week, he died of Covid-19.

Now I’ve supported Manchester United all my life. I’ve been part of the fierce rivalry and often hostility between United and Liverpool. But injustice angers me; incompetence by those well rewarded to keep people safe makes me infuriated; while disdain for honest working class people by those who purport to be ‘superior’ fills me with disgust.

That day at Hillsborough showed the worst. Maybe those responsible will be judged elsewhere. Hillsborough victims, may you rest easy forever.

David Conn has written many excellent pieces – try this one in the Guardian: https://www.theguardian.com/football/2016/apr/26/hillsborough-disaster-deadly-mistakes-and-lies-that-lasted-decades

This is worth a read if you want to know more…https://hopeforhillsboroughjustice.wordpress.com/what-happened-at-hillsborough/